The main crops in Cuba are sugar cane, coffee, and tobacco. There are also cultivations of Mango, Banana, Mamey, and Pineapple; in addition to food crops that are part of the Cuban diet: malanga, sweet potatoes, potatoes, and yucca.

In the 14th-century sugar cane was introduced to Cuba and has been the driving force of the country since then. The visits to the old sugar mills and coffee plantations are classic destinations, being an important  part of Cuban history and socio-economic development.

Sugar production was initially based on the exploitation of slave labor from Africa, then technology has developed the production transforming it almost into a monoculture, primary sugar exporter.

Coffee dates back to the 18th century when the seeds of the coffee plantations were brought from Haiti. The first harvests were made on the outskirts of Havana and then with the arrival of the French colonists who fled from the Haitian Revolution, it spread to other parts of the island of Cuba, mainly in the Sierra Maestra, due to its height, humidity and temperature, were the favorite places for this cultivation.

In Cuba, the cigars, commonly called “ the best cigars in the world”, are still handmade. According to expert smokers, cuban cigars have a flavor and an aroma that distinguishes them from any other cigar. One hundred percent natural, the manufacture makes them soft and strong.

Making a Cuban cigar is an art and a profession, according to many people there are no good or bad cigars it all depends on the hand of the person who rolls the tobacco leaves. The best tobacco in Cuba is the one grown in Pinar del Río, there is an area known as the “Cuban cigar Mecca” and today is an itinerary to visit in Las Vegas for tourists and participants in the famous Habano Festival which is celebrated every year in the season of plant growth. Famous brands are Montecristo, Cohiba, Partagás are multiple and famous, among other things with different formats, diameters, lengths, and figures, as well as an art that identifies their packaging and rings. 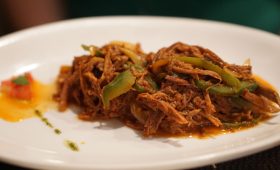 Cuban cuisine. Flavors of the island